Two years ago, I started working on being fit. I had gotten out of shape after years of being both broke and depressed. A routine checkup showing a higher than normal blood pressure finally convinced me to turn things around.

To tell you the truth, 80% of what got me into shape was a change to a higher-protein diet. And if I only focused on getting more sleep, I’d be in a much better shape than I am right now.

But of course, tasteless chicken breasts and sleep is boring. You can’t copy it in the hopes of adding it to your Instagram. So let’s talk about the last 20%: my exercise regimen.

After doing a bit of research, I found that I couldn’t fit in gym with my schedule. I work early shift so early morning gym would mean going there at 3-4AM, and post-work gym would mean that once I finish working out at 5 or 6PM, I’d get stuck in traffic rather than have a relatively quick 45 minute one-way commute had I gone home at 3 or 4.

The traffic constraint lead me to my main exercise routine: Urban Hiking. It’s what I call going from BGC all the way to my house 7.5km away. I don’t want to call it “running”; while I typically run 4-5km of the route, the hills, varied running paths, and the cars make it very hard to run all the way, especially for a person like me who has no interest in being a runner.

The lessons I learned from being an urban hiker will be in another blog post. For now, let’s go with something more interesting: my workout gear.

After 2 years of half-assed training, I determined the best combination of equipment for me: 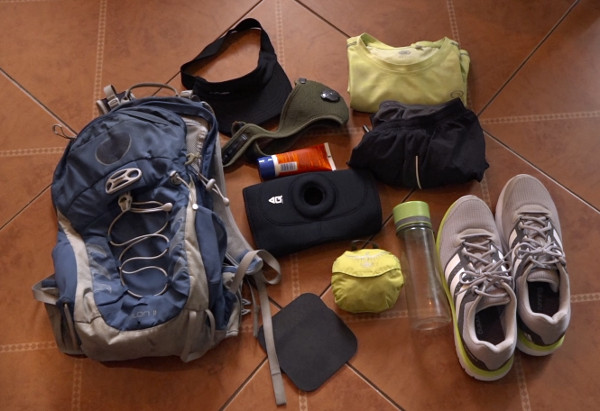 Not pictured is my vivosmart HR fitness band. In my hikes, I mainly use the heart rate monitor to guide me to the (in)correct heart rate zone of 160-180 for anaerobic fun (the correct heart rate for running is 130-150). The step counter and sleep tracker are automatic so I don’t really use (i.e. activate) them, and they provide useful stats. Apart from that, I don’t treat this device as any more than a watch, though having an extra buzzer for early morning alarms and call notifications is also appreciated.

Here are some stuff that isn’t my gear anymore:

And there’s my loadout. As mentioned above, had I focused on my sleep patterns last year, I might have lost more fat and gained a lot more muscle. However, I’m still very happy with my progress overall as my legs are a lot sleeker than they used to and that 5km walks are practically nothing to me right now.