Remember when I suggested to “track down and itemize every expense you make down to the peso“?

Well, here are the results of my financial tracking: 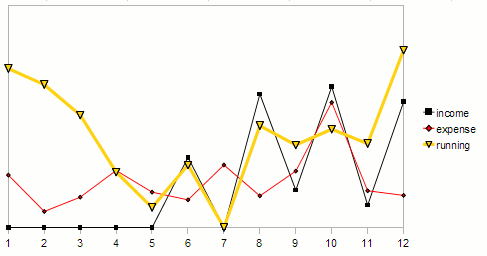 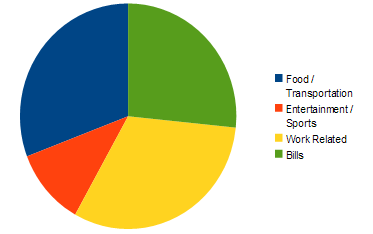 (I obviously fudged around the numbers a bit to give people a hard time guessing my income/expenses. :D)

First graph is the typical debit/credit graph showing my income and expenses for each month. The yellow line shows the running balance I have at the end of every month, zeroed at the lowest point of the year (end of July).

I got my first paid gig for the year last June, followed by another in August. Both are one-week teaching gigs, and as you could see in the graph, they cover 2 months of expenses on their own. Whether it’s because they pay that much or because I’m just that frugal is up to you to think about.

Started part-time consultancy work in August, going on site 2-3 times a week. I sometimes receive my pay the next month instead of the end of the month, thus the erratic nature of the chart.

The expense graph is mostly me living below my means (before June I was living off my savings I saved 2 years previous) with 4 noticeable spikes. January had me buy Windows 7, April had me pay for the domain and hosting of my 2 sites, and July had Starcraft II and Persona 3 Portable.

Buying a workhorse laptop at a Lenovo sale caused the large spike in October. Thanks to a teaching gig that month, I was able to make that purchase without seriously affecting my finances.

I don’t count September as a spike — looking at my ledger, the increase in expenses was a direct result of going to work, the biggest culprit being the expenses of eating out for lunch along with yuppies who still don’t have “financial independence” in their vocabularies. As seen in my November and December expenses, I eventually learned to spend up to 50% less than my peers in lunch outs without them noticing.

The second chart breaks down my expenses to different categories.

Work related expenses take the lead. But that’s kinda expected when you buy a laptop, a new hard drive, a couple of sticks of RAM, a VPS, a crapload of books, and an OS upgrade.

Food and transportation expenses surprisingly take second place over Bill payments. Eating out is obviously the main culprit, which is funny because I’m perfectly fine with eating a buy-one-take-one burger for lunch. The secondary culprit would be my soda and iced tea addiction which costs me over 10k per year.

Finally, the entertainment and sports related expenses only make up around 12% of my expenses for the year. Makes sense since the only games I bought at full price were Starcraft II, 2 Shin Megami Tensei games, and Recettear, the rest bought during Steam sales. Also, I only watched 3 movies this year, and my sports/fitness related expenses were pretty much negligible.

I only lost a month’s worth of expenses even though I only worked about 4 months this year while shelling out dough for a new laptop, VPS, etc. and eating out a lot.

And people wonder why I’m not looking for full time work.