Why not Mac? Beer Game

A quick Google search told me the computer problem was probably a memory error and so I set my PC to run Memtest86 on a loop before going to the office. When I came back, my RAM passed 13 tests with no errors.

And then when I restart the PC the continuous beeping returned. =/

With the memory out of the question, thus began my 3-hour trial and error session to isolate the problem. PSU problem? Nope, multimeter reads normal voltages for all lines. Overheating? Cleaned off the dust from the CPU and video card heatsinks to no avail. Extra devices screwing with the motherboard? Removed all but the HDD and video card but still the continuous beeping happens once every few reboots. Heck, I even tried replacing my HD4850 with my spare GTS8800 to remove the possibility of a busted video card.

Another run through similar problems via Google gave me an idea: what if Memtest86 was wrong and it really was the memory?

And so I tried the Windows Memory Diagnostic that came with Windows 7. 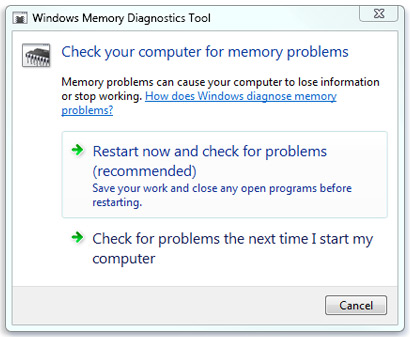 In less than a few minutes, I found out that my RAM really was busted.

Memtest86 was trumped by a Windows utility program. Weird.