One of the first things I asked myself when I left my job last year was “Should I get a Mac?” With the rise of the Apple App store and the lingering notion that the best developers work on MacBook Pros, I had to decide whether or not I’d shell out enough money to fulfill my needs for a year just to get such a machine for future work.

I eventually decided not to buy one. I did, however, buy a 2nd gen iPod Touch 8GB for 8k to make me think about building iPhone apps. After some months of use, I concluded that I didn’t have the proper skill set to make apps on such a platform, firmly cementing the idea that I didn’t need a Mac for my personal projects. (I still use that device, though, primarily for late night fanfiction reading to lull me to sleep.)

Lately, I’ve had the opportunity to try out using Mac OSX and see what all the fuss is about regarding the platform. After using it for a while, my decision still stands: there’s no reason for me to buy a Mac.

Let’s look at things from a historical standpoint: If you were a serious developer 3-4 years ago, Mac was the way to go. Windows XP was a security nightmare while Windows Vista just sucked. Linux was as user-unfriendly as they get. Mac OS X Tiger beat them hands down.

Fast forward to the present: Windows 7 is both secure and “shiny” while still providing most of the familiar Windows interface. Malware is a lot less of a concern thanks to the unobtrusive and free Microsoft Security Essentials. On the Linux side, Ubuntu 10.04 Lucid Lynx has gone a long way in terms of giving a clean and user friendly interface to desktop Linux. Driver support has improved a lot; you don’t need to recompile kernels anymore. You’ll probably even have more driver problems with a Mac than with a Linux box.

In short, I don’t see a compelling reason to buy a Mac if you’re not a graphics designer/you’re not building Apple-specific software.

More details below the cut…

Let’s list down the “benefits” of owning a Mac and see if they are really worth the 50% – 150%+ increase in price. I’ll be looking at them in my context: an experienced developer whose main computer is a Windows 7 gaming rig with VirtualBox to run Ubuntu instances for development.

Macs are easier to use – trivial

I’ve already dismissed the whole polished UI thing earlier in this post. Windows and Ubuntu have already caught up with OS X, the latter not changing its UI radically for quite some time now.

As for ease of use as a whole, yeah installing via DMG is easier than Windows MSI/exe installers or installing deb files from apt, but that ease of installation is offset by the fact that you’ll have to reconfigure some settings to make OS X work like Linux e.g. change Cmd-C/X/V to Ctrl-C/X/V for copy-cut-paste, fix the Home and End button in Terminal to move the cursor instead of the scrolling the screen, etc.

Oh and yeah, say goodbye to maximizing your windows with a single click (unless you install a third party app).

Macs are more reliable – no

On the hardware side, Apple doesn’t make its own hardware. It sends them to the same component and system makers that make PC components and systems. Regardless of the supposed superiority of their designs, as they say: “a chain is only as strong as its weakest link”. When individual parts fail, the whole thing fails and you send it to Apple for repair. And they do fail, more likely than any fanboy would like to admit.

And don’t get me started on how I can easily fix my computer with the spare parts lying around my room as compared to my chances of repairing an iMac.

On the software side, Ubuntu is just about as stable as OS X. And with Windows 7, all those FUD from the silly “I’m a Mac” ads no longer hold true as much as they did in the day. And face it, Macs also crash and get their own BSODs.

Macs are safer from hacking and malware – just no

Thanks to Safari, Macs are usually the first to get pwned in Pwn2Own. So regardless of its Unix roots, Macs are just about as insecure as other computers.

As for malware, the whole notion that Macs can’t get malware is dangerous for new users, especially in the age when social engineering has become the primary attack used to snare victims. Even Apple acknowledges this; why else would they show the following warning when you try to run something downloaded from the Internet:

Yup, Macs have the same “annoying” UAC as Windows does.

There are some apps that only work on a Mac

Perhaps the only valid reason for me to own a Mac. That is if I’m going to build iPhone apps. As a Rails developer, there’s only one Mac-only app that’s used by the Rails community: TextMate.

They say using TextMate adds to your Rails geek cred. I tried it for a couple of days before giving up and downloading MacVim to go back to vim.

The reason why I chose the latter: :vsp 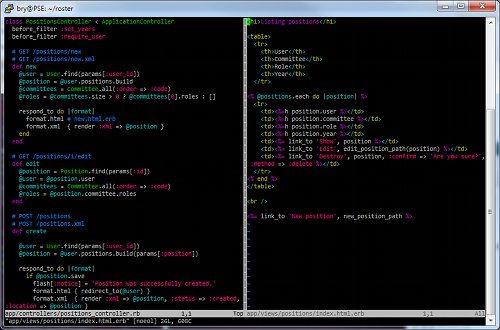 TextMate doesn’t support split screen. Most of the common development environments, from vim/emacs to Eclipse/NetBeans supports it.

The whole thing with TextMate showed me the problem with the Mac in general. When the former burst into the scene half a decade ago, everyone was amazed by it: it had scripting capabilities like emacs while having an intuitive user interface. Fast forward to today, it’s still the same old TextMate. Free alternatives like Text Wrangler have already popped up.

Same thing with OS X. A good number of people switched to the Mac not because Macs are more aesthetically pleasing, but because of their horrible experiences with the PC. Years later, they still stick to their expensive Macs even after Windows and Linux have already addressed those problems.