I don’t feel like posting Software Engineering or Management posts yet, so here’s something different: a graph mapping the complicated plot of the recently concluded series Tsubasa Reservoir Chronicle.

Spoilers for Tsubasa and its sister series xxxHolic below the cut. 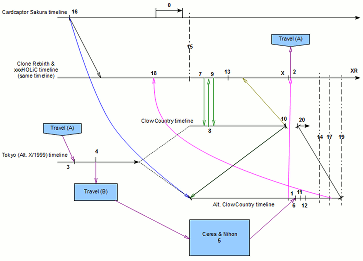 Boxes and ticks on the lines represent events. The numbers label these events as well as provide the order in which they are presented in the manga.

0 – The events of Cardcaptor Sakura

2 – The team gathers at Yuuko’s shop

Travel A – Mostly filler when considering the overall plot

8 – Fei Wong Reed screws everything up

10 – Where shit hit the fan before

There’s one important thing missing in this graph: the Watanuki Falls event. This occurs simultaneously at 4 and before 14 in the xxxHolic timeline.