In this series of posts, I’ll be discussing the different Filipino dishes that I’ve been cooking and experimenting on for quite some time now.

« You can find out more in the introductory post.

For this first recipe, I present the very first dish I learned to cook on my own: 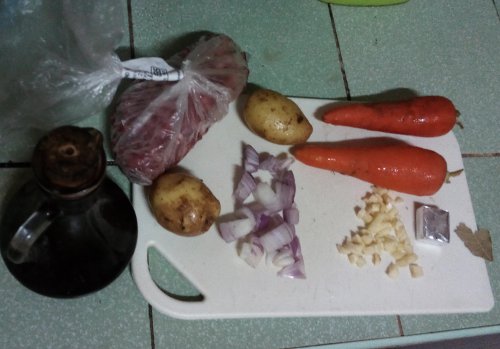 in the picture: small carrots and potatoes in place of medium

Step 1: Put the beef in a pot (I prefer stainless steel) over medium-high heat. Stir the meat around once in a while to evenly brown it. As the beef starts to brown, dump in the onion and garlic and saute them along with the beef.

Giniling (literally: ground- e.g. “giniling na baka” is “ground beef”) is a dish made with ground meat as the base. It has many variations, the most common of which resembles Picadillo – ground beef with minced/diced vegetables and tomato sauce. The dish can easily be tweaked to make the other versions and we will go through them later.

As mentioned above, this soupy, soy sauce-only variation is also the first Filipino dish that I learned to cook without any guidance as a grade school student, a testament to how easy this dish can be made. It’s also almost the same recipe, with slight modifications based on the lessons that I learned since the first time I made it.

Now on to the “Science”, starting with the meat.

Anyone who has made burgers will know the importance of the lean/fat ratio – lean cuts like ground sirloin (90/10) will reduce the fat at the price of flavor. Using cheap ground beef (70/30), however, tends to make the dish drown in fat. I would suggest using ground sirloin first then experimenting with mixing it with the cheap stuff.

Don’t wash the ground beef on a strainer! You might find this weird but some people actually do this. Some say it’s to clean the meat (no need, bacteria will die at browning), others say it’s to reduce the fat (just get a leaner cut or scoop out some of it after browning). The only good reason for washing beef is to find bits of bone in the meat, and this can easily be remedied by buying your beef at any decent meat store.

In terms of cooking, it’s ok to just cook the beef to gray done-ness especially if you’re pressed for time, but browning (i.e. Mallard reaction) imparts additional flavors to the meat.

(For the newbies: by “brown”, we don’t actually want you to overcook it to “totally brown”. It’s more like “gray with brown bits” like your favorite fast food burger. Browned meat bits covering a good portion of the bottom of the pot is a good sign to stop.)

With the meat done, step 2 is all about turning the dish from “Stir Fried Ground Beef” to “Giniling“. Let’s run through the rest of the ingredients and the possible variations:

The “add-ons” provide a contrast for the flavor and mouthfeel and should be small or at least bite-sized. Traditionally this would mean diced carrots, potatoes, and chayote (I love chayote, but I usually reserve it for other recipes so it’s not in this one). Variations include raisins, peas, corn (all 3 require no prep, and peas, corn, and carrots are the basic frozen mixed vegetables), and boiled quail and chicken eggs.

String beans as the lone addition is another option. This will turn the recipe into a cross between Giniling and Adobong Sitaw so no tomato sauce should be added. You can saute the green beans for a while before adding the water, or you can just let it boil/steam.

The remaining ingredients build the flavor profile. Soy sauce and/or tomato sauce/paste provide the base flavor (oddly enough, these two ingredients work well together). We don’t use tomato sauce in our household for practical reasons: while soy sauce is used everywhere, tomato sauce isn’t and will just sit idle in the ref. Not to mention that there’s no much difference in the flavor whether you use it or not (IMO).

The bay leaf is there for the aroma; don’t use too much of it or it will overpower the basic flavor. You can remove the bay leaf before serving if you want.

Beef bouillon cube isn’t a traditional ingredient, but I find bouillon cubes to be a better alternative than guessing the right amount of salt to bring out the body and flavor of many Filipino dishes. (Beef stock would be nice, but since when did you see beef stock in your average Filipino household?) Sometimes I also add oyster sauce for extra body and a hint of sweetness.

And finally, the last ingredient: water. Adding enough water to cover the vegetables will produce soupy Giniling. In some cases, you may not want a soupy dish e.g. you’re serving it along with stew. You can reduce the amount of water by half in those situations.

You shouldn’t remove water and rely solely on the soy sauce for liquid, however, as you need water to cook the vegetables and help >deglaze the bottom of the pot where much of the flavor is still stuck.

And that’s it, a basic Filipino dish that a child can cook. You can’t really go wrong with it apart from adding too much soy sauce and making it too salty, and even then you can try to salvage it by adding sugar.