Now while I am the current VP for Technology of the said group and spent 6 hours painstakingly checking a good chunk of the submissions, I wasn’t involved in the making of the problems (I was the tech support guy, not a “judge”). I didn’t even look at the problems until it was linked to on the event page days after the event.

Anyway, being a sucker for computer science problems I’ve decided to solve all of them on my own. And given that nobody used Ruby at the event, I going to use Ruby to solve them.

Note that while I’ve confirmed that the solutions below pass the judges’ test cases, they are not (yet) endorsed by any of the judges in the event.

Oh, and yeah, to back up my claim that Quiwa’s Data Structures will allow you to solve most of the problems in programming competitions, I’ve included references to the said book in the solutions below. While this problem can be solved with some difficulty using brute-force, going through all possibilities of a and b in 0.001 steps, the formula for this problem (simple linear regression) is pretty straightforward.

A few things to note about the code above:

This is what I’d call a “coding problem”. There are no Computer Science or Math related tricks here; the problem can be solved by anyone who knows the basics of programming e.g. basic data structures, string manipulation, and sorting.

The lines 20 – 26 above can be confusing for non-Ruby or non-Perl programmers due to the amount of small things done per line. Let’s translate it one by one:

Line 20 creates a translation table/hash which we’ll use to translate the words.

Line 21 – 24 creates a new array containing word pairs consisting of the input words and their equivalent words in the Ripley alphabet.

This is the first problem whose solution you could find in Data Structures. A major district in the problem is a vertex, once removed, produces a graph where there is no path between one or more pairs of vertices. This can easily be determined once you have a transitive closure for the graph, which we will construct using Warshall’s algorithm.

The code above a bit straightforward:

This problem can be solved in many ways, with the simplest being graph traversal algorithms. And the simplest of those is depth-first search which is used by the code above.

To summarize what the code above does:

Another coding problem. Expect to fail many technical interviews if you can’t program this in less than 30 minutes.

The existence of Array#count() makes this problem too easy in Ruby.

Like Problem A, this problem can be solved either through brute-force or having knowledge of microeconomics or mathematical optimization.

And it can be solved using blind luck.

To explain why it can be solved through luck, we must first look at a “real” solution using Lagrange multipliers: 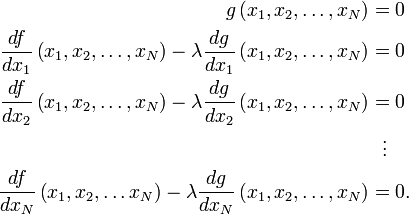 However, if you set the function and constraint to the ones given in the problem and take time to solve the partial differential equations, you’ll end up with something like:

If you were lucky, you could’ve seen this pattern in the examples:

In short, the price x quantity of each good is proportional to their substitutability scale. From there, it should not be hard to derive:

We need to find the path between two points in the graph that produces the highest probability. Calculating probability of independent events is simple (just multiply them all together) while finding the path is only a matter of choosing which pathfinding algorithm to choose. For the code above, I chose the most common algorithm: Dijkstra’s Algorithm.

Line 24 onwards is a direct implementation of the algorithm from the book.

The easiest problem of the set. All it takes is for you to know how to calculate the GCF of two numbers efficiently. If you’re not using Ruby or Python (which has built in GCD functions), you can code the Euclidian Algorithm in less than a minute.

This classic puzzle isn’t that hard when you use graph-traversal algorithms on it. Since we’ve already used DFS and Dijkstra’s algorithm above, I chose to use Breadth-First Search this time around. (Note that DFS is fine because there’s no “shortest path” requirement.) 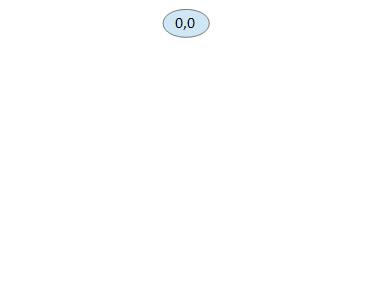 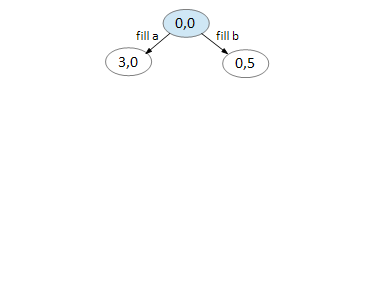 We can only do two things, fill A and fill B. All other moves returns you to the same node. 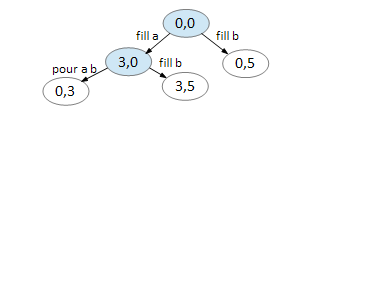 On node (3,0), we can fill B and pour A B. Again, all else returns you to a previously visited node. 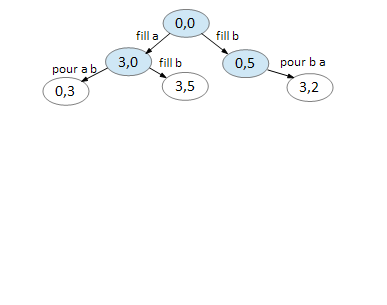 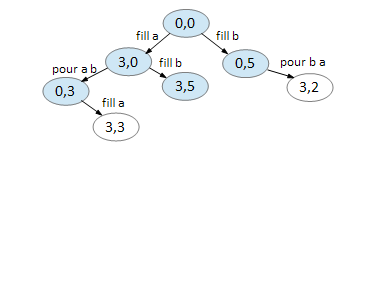 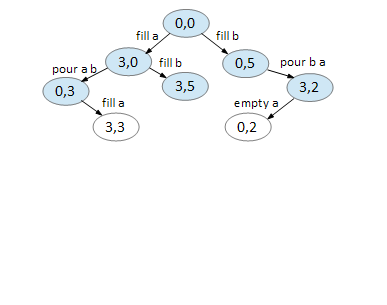 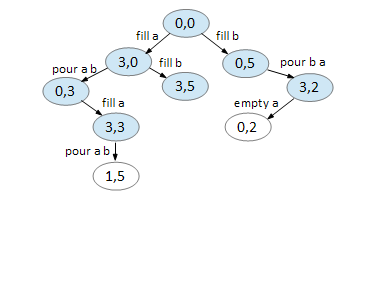 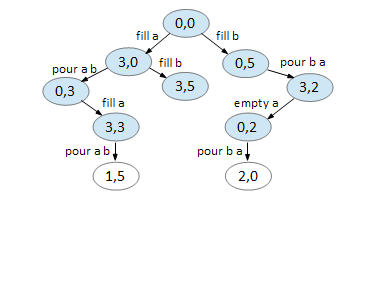 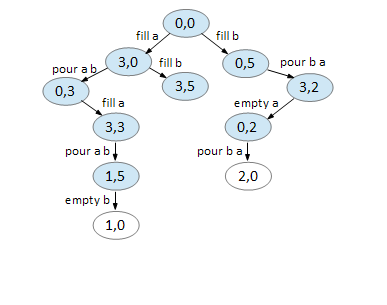 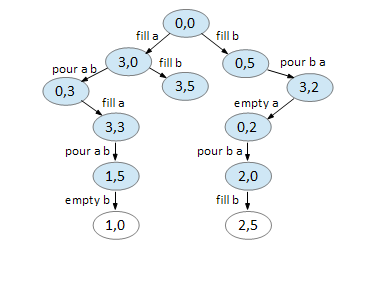 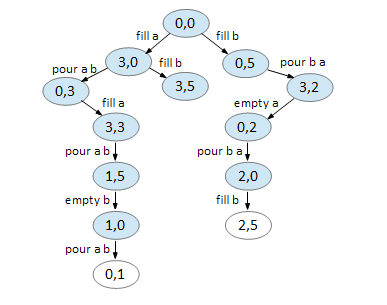 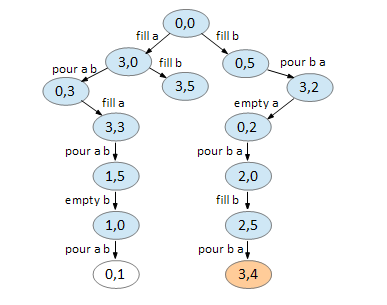 Backtracking, we now have our solution.

My BFS implementation is kinda weird in that it doesn’t use a real queue (it uses a simple array) and we store the back edges along with the action in a hash of a hash.

Last and probably one of the least, we have this coding problem.

Your main problem here is how to calculate factorials – using normal integers, you’ll get to the integer limit very quickly. There are many clever ways of calculating the last non-zero digit of a factorial, but there’s really no need to do that. Using arbitrary-precision arithmetic (e.g. Java’s BigInteger) you can calculate 10000! in all of the given languages in less than a second using less than 1MB of memory.

Here’s what we did in the Ruby code above:

And that’s that. To summarize, we got

In other words, it’s a pretty good problem set for programmers of all levels. I might even go as to say that, given enough time, a second-year Computer Science student should be able to answer 8 of them armed only with a laptop, their textbooks, and a complete programming language API.