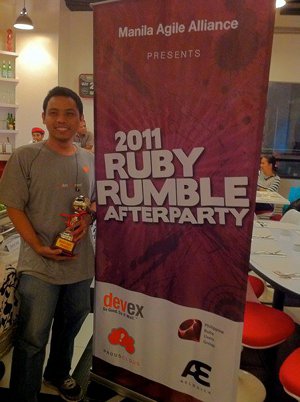 Normally, I would’ve posted something like this a lot earlier. But work interfered so…

Anyway, since I won the event, I really don’t have an excuse not to do a post. Blow the cut are some of the lessons I (re)learned at the event.

I didn’t go to the Rumble to win; my main intention was to go there and get my coding on for 8+ hours straight, something that I haven’t done for quite some time. The idea I had was to make a stupid game (in the vein as Kingdom of Loathing and Mafia Wars) as a follow up to the stupid game I made last year.

But apparently the participants thought my project was the most interesting that day, regardless if it was coded on the most boring Ruby platform and on a boring OS.

Which brings us to the first lesson: It pays to be prepared. Rad mentioned in the after-party that the winners of the Game Jam didn’t look like they were there to just “jam”; they were focused and seemed like they had a clear goal.

At that point, I casually revealed that I practically did the same thing. I had my database designed and my tasks planned out the day before, all written in my notebook. You could even see in the commit history that I finished all of my initial models in the first hour of the event.

The other three lessons are more on the technical side, a few basic pitfalls in writing Rails apps.

No thanks to the recent changes in the Ruby landscape, I had to manually define some gem versions in my Gemfile: rake 0.8.7 and mysql2 v0.2.7.

The next lesson was a facepalm moment: I forgot that type is a reserved word in ActiveRecord so I had to rename my type field accordingly.

The final technical lesson was both a stumper and a facepalm moment. I spent over an hour wondering why a ResearchProgress can’t be created even though the new record is perfectly valid when tested with valid?.

Turns out I forgot that a record isn’t saved when a callback returns false. That part finally worked perfectly a single word later.

Overall, it was a good event. It was great to see a bunch of passionate developers in the same room hacking away at code just for the sake of coding. I’d like to see more of these events locally, with the other developer/designer groups joining in the fun.

(As a side note, even though it was a “Ruby” Rumble, the nature of practical development made using pure Ruby impractical. For example, Jason’s monitaur‘s client was written in JavaScript.)

In closing, I’d like to thank those that made the event possible:

Ubertor for providing the venue. Micro.ph/one for covering the event so I didn’t have to. (LOL)

The newly formed (informal) Manila Agile Alliance (Proudcloud, Devex, and Aelogica), for sponsoring the after event party at Focaccia.

(Another side note, why the hell do Filipinos sign up for events even though they won’t attend them?!? Beer was practically overflowing in the after event party because the people who signed up didn’t show up.)

And finally, Rad, Topher, and the rest of the PhRUG peeps for organizing and eventually showing up and participating in the event. Hopefully this would be a regular event for the local Ruby community.

Oh, and yeah, the prize for the next Rumble should be a belt. :D

One Response to Basic Lessons from Ruby Rumble Practice